As expected, Nvidia are continuing their trend of releasing the 50 series GPUs after the launch of their flagships. Earlier this year it has been rumored that it won’t be launching, for some reason, but as you can see now: We have some GTX 1050 leaked information and specs.

So as seen in the table above, the GTX 1050 will be sporting 768 CUDA cores on a much lower clock speed than the 1060, and this shoudl land it right in between the 470 and the 960 if not better, although, reports from KitGURU say that the GPU-Z screenshot (Which was the actual leak that gave us all this info) showed that the GPU was not boosting that much over its 1318MHz base clock. This may be due to Nvidia hard locking the VCore or just because of FinFET, no one has any clear answer yet.

We have no information yet on whether or not this GPU will get a Founders Edition or not, hence the very low price point, every addition on the price will render it useless. I really hope this trend of giving and MSRP and never making a card at that price point will go away because it’s just been a pain in the wallet.

Nvidia is showing off their muscles with the Pascal architectural efficiency by rating this GPU at a mere 75W of power consumption. And for the people who know this already, you can pull tat much power through the PCI-e bus so you practically don’t a PCI-e power connector. But of course we will be seeing AIB overclocked cards after the release of the GPU which is rumored to be around October. 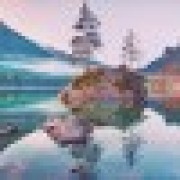