As many of you know, mechanical switches are taking a comeback after the years it has been forgotten. The reason behind that is that the industry wasn’t really looking for different feels for different tasks nor faster switches, what it all needed is just keyboards.
If you have no clue about the difference between different switches types I will walk you in.
There are currently 2 main types of switches and 2 hybrids.

The first and the most common ones nowadays are the Membrane or the rubber dome switches. You have your keycap, underneath it you will find some type of spring action, the keys need to be bottomed out completely in order to flatten out a rubber surface underneath it to make contact with the PCB (Power Circuit Board) to finally send the signal. These keys are significantly cheaper to produce than mechanical ones and as said earlier it offered what the industry wanted.
Now that the gaming community has evolved, we wanted more than the normal mushy-feeling, cheaply-made membrane switches and turned to Mechanical switches again. These switches feel much more premium compared to other types and it has a complex, much faster actuation mechanics. The switch doesn’t need to be fully bottomed out to send the actuation signal to the PC but rather pushing it to the actuation point which differs from a switch to another, making it a very versatile and reliable choice. But not every game resembles the other. So with different games, come different preferences. The leading company in manufacturing these switches is called “Cherry”. This company has different switch types under different colors to suit the preferences of each gamer. They have 3 main different feeling and sounding switches which they based on their other switches. These main ones are:

As many complained, the Blue switch is extremely loud while typing and some companies started banning it at the time, Cherry made a more silent switch called Brown. It basically stood true to the feel of the Blues with the tactile bump but it got the click sound removed making it a more viable option for typists and MOBA gamers where they need to know if their move got activated without looking at the indicator bars. Actuating at 45g, this switch feels a bit liter than the Blues

This switch eliminated any tactile feedback from the other switches by being more linear and not containing and click sounds nor bumps, it reduced the noise of the switch significantly making the only audible sound being the keycaps striking the bottom of the board itself. This switch was rapidly adopted by FPS gamers feeling the need for more speed when pressing a key since it has a clear action on the screen whereas MOBA has a lot of bars that pulls away the focus of the player if he needs to check something. It actuates at the same pressure as the Browns at 45g

The next switches are hybrid ones only one being much interesting to talk about.

These are the typical low-profile membranes found in laptops, nothing special except for its particularly small size.

These switches are a hybrid between Membranes and Mechanicals. It works as the following: 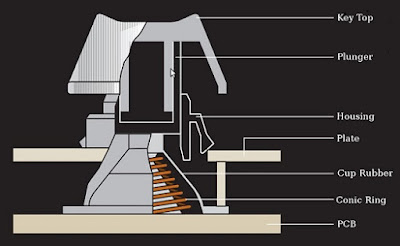 The switch has a cone-shaped spring which pushes down on a rubber dome to make it feel right in-between mechanical and membrane switches. Yet it actuates on a plate designed to input the stroke at 8ms compared to the Cherry’s fastest 20ms on the Reds. Typists absolutely adore this switch making it an enthusiast grade piece of hardware retailing at a higher price than mechanical keyboards.

A quick round up on what was said here:
– Mechanical switches are better if you could afford a keyboard that has them
– Reds are for FPS
– Blues and Browns are for typists and MOBA/MMO gamers
– Browns are significantly quieter than Blues
– Topre switches are the best for typing.

Tips and Tricks:
– If you have a Red but you still want to reduce the sound of the keycaps striking the plate underneath them buy O-Rings, which are basically small O-Shaped rubber rings that install underneath the keycap to prevent it from bottoming out thus reducing the overall noise.
– If you’re still unsatisfied with the noise get the newly released Cherry MX Slient switches but you can unfortunately find them on one single keyboard for the moment which is the Corsair Strafe RGB.
– Remember, if you go clack you can’t go back! The experience of mechanical keyboards is incomparable with other switches. You’ll have a hard time downgrading.